Embracing Monotony and Filling the Blanks features McDaniel Art Alumni, David Ross (Studio Art) and Steph Perez (Graphic Design). After graduating from McDaniel College in 2011, David pursued an MFA at American University in Washington, D.C. Once completed, David worked at ARTLAB+ as a 3D Design and Maker Mentor, and is currently the Maker Space Manager at Temple University in Philadelphia. His animation and design experience are extensive and varied.

Upon graduation from McDaniel in 2015, Steph became a team member at Higher information Group in Harrisburg , PA where she had interned while in college. She has been a Web and Graphic Designer for the past 5 years at the same company. Simultaneously, she has created the work you see in the exhibition. According to her active Facebook and Instagram pages she also creates pet portraits in her graphic style, and is an active photographer.

Although separated by four years David and Steph took Advanced Studio Art where they both focused on sequential art. Working in different styles they created equally complex and engaging comics. While working art related day jobs, they both continued to pursue their love of graphic art. Steph has been creating graphic representations of her coworkers as gifts, focusing on the life that happens in the mundane moments working in an office setting. These comic representations of her ‘work family’ are reminiscent of a graphic novelization of The Office tv show, but with a whole new cast of characters. David creates comics based around ‘Blank’ D.I.Y characters, a term coined in the designer toy field. These ‘Blanks’ are open for artist interpretation and allow David to endow them with the humor, love, and fears that he had as a child. As he customizes and develops them, they take on adult character traits and become involved in complex narratives that are both comically humorous and disturbingly real.

This virtual exhibition of David and Steph’s work highlights their ability to design and control complex composition and make the most out of black and white. When we look at their work we realize that Steph has found life in the monotonous and ‘blanks’ are to David what marble was to Michelangelo. We in the Art Department are grateful they agreed to share their work once again with the McDaniel community. 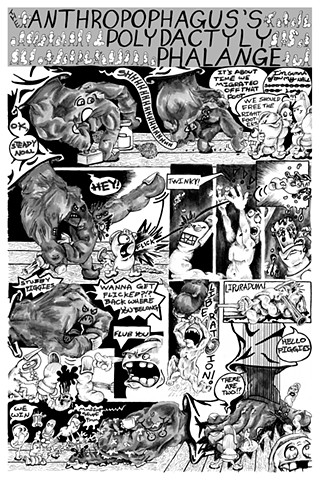 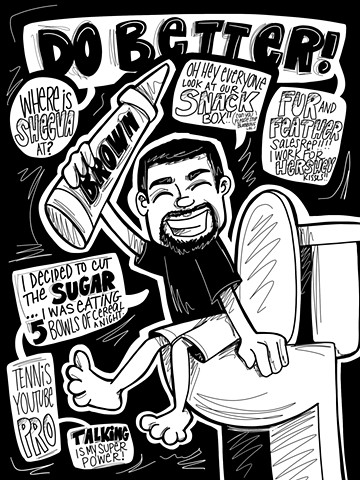